A GIRL OF THE NILE BATTLES FOR THE SUEZ CANAL

In the tradition of Esther Forbes’ Johnny Tremaine, The Colonial starts small, with a pact made among five school-mates, then widens to depict intrigue on three continents, ending with the birth of the American republic.

“A colonial” is what young Turkish Prince Mahmud longs to be, so desperately that he abandons Topkapi Palace for a Boston-bound ship. Once in the new world, the impressionable prince finds that the struggle for human dignity is not quite what he imagined.

His spoiled schoolmates — Gilbert, a haughty young French nobleman; Clotilde, niece of Catherine the Great; Will O., a Dutch banker’s son; and an unpredictable Prussian, Leo — each lend a hand. Collectively, they turn the tide of the American Revolution. The story culminates at the Battle of Saratoga. 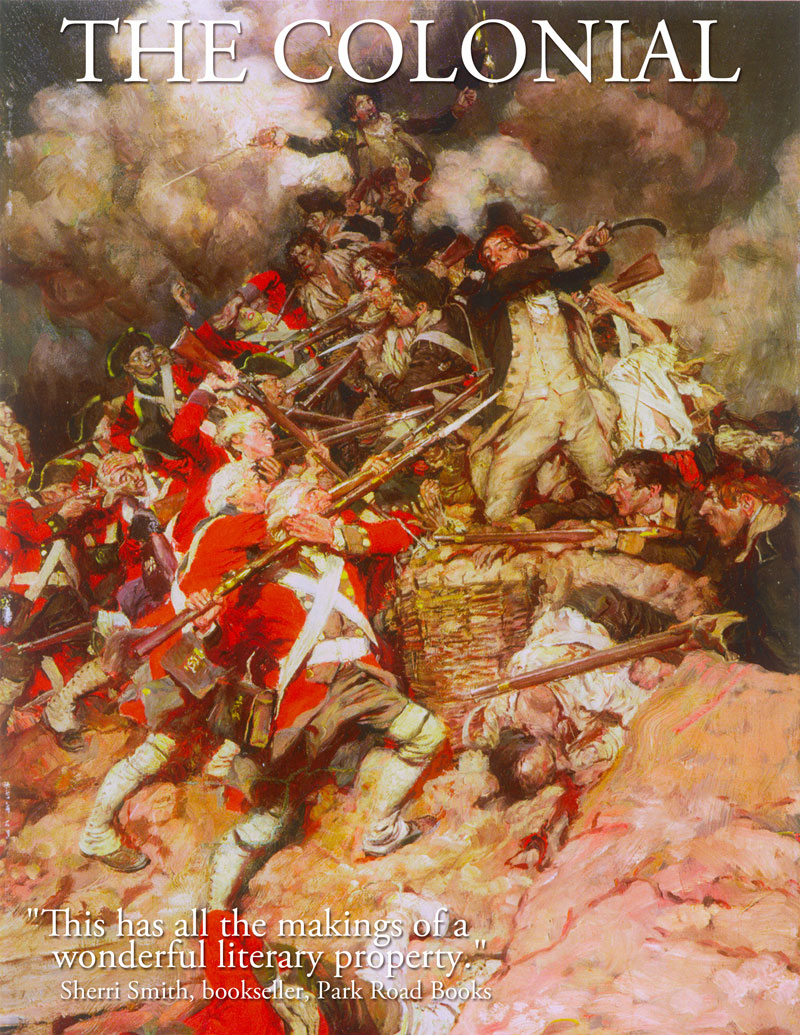 This has all the makings of a wonderful literary property. Sherri Smith, bookseller, Park Road Books

“Surely you don’t mean young Will is to inherit such a tiny portion,” asked Johannes Mickler, “while Caspar controls the majority share. You are disinheriting your own worthy son, just because he is second-born.”

“It’s not exactly a new practice, Johannes,” replied Pietr Oldenbarneveldt. “Primogeniture. The first-born gets everything.”

“And you approve of this?” demanded Mickler of the round-faced woman at the other end of the well-set table.
Madame O. nodded as she finished chewing a mouthful of salad.

“But Will is smarter than Caspar,” argued Mickler. He nodded respectfully to Caspar, tall and elegant, who nodded back.

“Caspar is socially adept,” said Madame O. “He is well-liked. Will is painfully shy.”

“Will is a hard worker,” said Mickler. “I have told you how helpful he was with the Intrepid’s ledgers.”

“He spends too much time among the ships,” said Madame O. “Too little among the people who count.”

“Caspar is the older brother,” pronounced Master O. “He inherits. He will have lawyers and bankers to advise him. Two brothers, two owners would never do.”

The sprawling Oldenbarneveldt home made much of patterns of light. They were everywhere – on the black-and-white checkerboard tiled floors of the kitchens, resting softly on the wooden roof beams, cutting diagonals on the patterned rugs, glowing on the cream-colored porcelain plates adorning the high shelves, sparking prisms of color in the goblets of stippled glass. Hand-painted fabric designs from India and the Orient hung on the wall. Outside, visible through the tall windows, ships moved on the stately canals of Amsterdam.

It was not unusual for Master Oldenbarneveldt to sign papers while he dined. Business was good. A handful of Dutch ship-owners like Oldenbarneveldt enjoyed an impossible economic reach, from Norway to Java, and sailed under a cloak of neutrality. North Sea fisheries flourished, the Zeeland shipyards constructed the finest vessels at sea, and Dutch regulations guaranteed Dutch quality around the world. The family confidante, the shipping agent Johannes Mickler, could not dissuade the Dutch merchant.

“This is not only unfair,” said Mickler, who was not generally a popular man, but a plain-spoken one. “It is unwise. This is a family business. Caspar does not know shipping.”

“You say that he does not understand the shipping business,” said the boys’ mother. “Yet he is to marry a daughter of Van Vliets. His best man is one of the Gustaffsons. He is prized for his looks and manners and wit among his generation.”

“If you are to banish your younger son from the family business,” said Mickler, holding one of the documents aloft, “then may I suggest that you grant him a lesser route, or two? The Bosporus, for instance.”

“Aye,” said Mickler. “The Baltic, the Hebrides – they are of little value. Unless you want an indigent son decorating the alleys of Amsterdam.”

“Very well,” said Master Oldenbarneveldt. “I agree to that. Have you made inquiries into that French school for him, Johannes — ?”

“Aye. He starts in two weeks.”

The maid collected the dishes.

“Good. He needs to learn a trade. Good God, Miranda, I’m not finished — thank you. He will be making his own way in the world.”

“I shall give him the good news,” said Johannes Mickler.

The news did not seem entirely good to young Will.

Later that day, he seemed smaller (even than usual) and younger to Mickler, seated there on the stool in the shipping agency which bore Mickler’s name.

“A school for young royals, in a village in France,” he repeated.

“Not royals, exactly,” said Mickler. “The Navigators invite those whom they feel might make a difference. I wrote to my friend Dubin about you. You will find him odd. He is odd. He is also the most decent of men. You will learn a great deal.”

But you may not like all that you learn … he almost added.

Will looked up, as though he could hear Mickler’s thoughts.

“Thank you, Johannes. You are good to me. Better than my own family.”

He takes it all in, thought Johannes Mickler, a man who had been to sea.

He is young, but he is one to count on.

It was not the first time he had remarked that to himself about his client’s second son.

Yekaterina Alexeevna (known to us as Catherine) arrived, unannounced, in her carriage at the house with the circular drive just before young Clotilde was to depart for the school.

She made a fuss over the Admiral’s daughter’s appearance.

“I hear good things about this … Dubin,” said Catherine. “You may learn things of great value.”

“We understand one of the Turkish princes will be there, my Lady,” said Admiral Ushakov.

“Really?” Catherine was surprised. “Tell him for me that we would prefer access to the Black Sea to a war with the Ottomans,” she said to Clotilde Ushakov.

Outside the tall windows of the Admiral’s house on Grovny Square, the carriage horses snorted, and pawed the ground, ready for the next ramble.

“There’s Orlov’s carriage, watching us from across the Square. That’s about right, isn’t it?” Catherine unleashed a string of oaths, mostly German.

She turned to Clotilde.

“Young lady, you were invited to this school on your own. Their invitations arrive, and cannot be acquired. But I am paying for your transit, and an escort, because I believe in you, Clotilde. You remind me of myself.

“– But we are sincere. We attract people to us.

“Write down everything you can. Everything. Especially about maritime lore. Dubin and his odd group of Navigators have a rare collection of tidal charts. That sort of thing.

“Russia is changing,” said Catherine . “Russia is revitalized. But sooner or later, the serfs will want theirs.

“Did you hear about the trouble with the Yaiks?” she asked Ushakov.

“Pugachev. Such a thing was unimaginable two years ago. Peasants and gentry aligned. But news of Boston reaches even the Urals. Christ!”

“We need to bring these new ideas to Russia,” she said to the girl. “We need to control them. We need to give the serfs their freedom. I just don’t know how to do it. Do you understand?”

“She is only a girl!” protested the Admiral.

“So was I,” said Catherine.

Clotilde’s eyes, so big and blue, took it all in.

“This school in France,” said Julide.

“Maybe you can lose some weight,” said Amir to his younger brother, Mahmoud, the smartest of the Sultan’s sons.

“You go to live among the infidels,” said their Mother, Bayazid, the Sultan’s first wife. “Infidels eat well.”

“Europeans are the nicest of infidels,” volunteered Mahmoud. “I hear there will be a Dutch merchant prince. And a niece of Catherine the Great.”

“Is that the new wife?” asked Julide, at the window.

“I think so,” said Amir, stepping to the curtains. “She apparently brings her own family. From Safavina.”

“It’s an alliance,” snorted Julide, with only a glance at her mother.

The carriage train made its way up the long entrance to the palace.

“Aye,” answered Darmoush, Mahmoud’s favorite among the Palace Guard. “We heard that the rebels lay along the Silk Road for your uncle, on his way back from India.”

Through the window, they saw Father waving from a window in the gilded carriage. The figure of a woman sat next to him.

A sudden loud knock banged on the door.

“Come,” bellowed Darmoush. A half-dozen guards entered the chamber to escort the prince.

“My son!” cried Bayazid suddenly. “This school will bring you doom! I feel it so strongly — ”

“Mother, you and your premonitions –” scoffed Julide, but they all stood still, thinking.

“My skin is cold,” said Papatya, the younger daughter, who struggled.

Mahmoud’s features looked frozen. They all knew that he had his own misgivings about this long voyage abroad, and he closely trusted his mother. He was only fourteen. His longest trip away from the palace had been a fortnight hunting trip, and that with his brothers and aides beside him.

“Your sister is right,” said Bayazid. “I’m being ridiculous.”

She held Mahmoud close, and would not let him go until the gruff Darmoush came in and pried him away so he could make it to the docks.

The tides were in. The Sehsuvar sailed at noon.